If I were psycho-analyzed it would be interesting to see why I always had a fascination with controversial international borders.

At the age of 16 in the Summer of 1961, within days of the Berlin Wall being built (or quite possibly while it was still being built/made more escape-proof) I was on holiday in Margate, but instead of helping my younger brother build sandcastles I was happily building a very rough representation of the Berlin Wall snaking its way across the city.

Borders such as this are so dramatic, and when they separate two totally opposed political systems and states, then even more so. Five years later, my first trip abroad was by train to the Soviet Union with a group of others, and one of the most exciting things was crossing the ‘Iron Curtain’ not once but three times on the way there. We crossed it between the Federal Republic of Germany and the German Democratic Republic, arriving at the GDR town of Marienborn where I proudly handed over my passport to GDR officials to be stamped, then again as we passed thru the enclave of West Berlin 100 miles inside the GDR, and across the Wall itself as we entered the GDR capital. The borders with Poland and the Soviet Union were also exciting to cross, but not in the same league.

Two years later I returned to the GDR, and one of my most memorable moments was being taken with a group of trade unionists, peace activists, and others on a tour of the ‘heroic border installations’ near the Brandenburg Gate by an officer of the National People’s Army of the GDR. There we were taken on to a viewing platform on the Western side of the Brandenburg Gate, just East of the Wall, to peer over it at West Berliners and other Westerners looking back at us. This moment focuses my fascination with such borders – at that moment I was so proud to be stating so dramatically my political beliefs by standing on the Eastern side of the visible dividing line between the capitalist West and the Communist East. 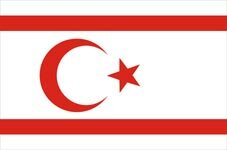 But it was not just borders between opposing political systems which fascinated me, and still do. Another dramatic border, the Green Line, runs right thru my father’s country of Cyprus. He was Greek-Cypriot, but on several visits to that country I have proudly crossed or entered the Turkish side, not least in that still divided city of Nicosia and once again was proud to identify myself with the Turkish Federative State of Cyprus and later the renamed Turkish Republic of North Cyprus.

In both Berlin and Nicosia, I attracted the fury of West Berliners, West Germans and Greek-Cypriots by my open display of support for the border and the state which lay the other side of it. In West Berlin fists were shaken at me and curses uttered as I wore the GDR state emblem on my lapel. In the Greek part of Nicosia by the Wall dividing the city, I signed in their book that it was the fault of the Greeks that the island was divided, and made no secret of my support for the TRNC as a separate state.

When on a holiday in Yugoslavia in the 1980s I also went on a one-day trip, with my partner, south to the border with Albania, another ostracized country in Europe. But this border was disappointingly very undramatic. We were several miles from the border up a high mountain, and no visible sign could be seen except where the spires of mosques could no longer be seen – Enver Hoxha having demolished them all in the world’s first atheist state. Otherwise, the pastoral countryside laid before us looked disconcertingly like observing Surrey or any of the Home Counties from a high vantage point just outside London. I think I expected to see 500 ft statues of Enver Hoxha and even Joseph Stalin staring at me from across the border.

This was my other fascination, huge monolithic monuments, such as the Worker and Collective Farm Girl monument in Moscow holding aloft a giant hammer and sickle. Or the TRNC flag etched defiantly in the Kyrenia mountains overlooking Nicosia taunting Greek-Cypriots.

I have always been a rebel, very rarely siding with the majority. Not only seeking out minority causes and siding with minorities or identifying myself with minorities, but then becoming a rebel or siding with a minority faction within that minority. This was as true inside the Communist Party and the Young Communist League as anywhere else, where I refused to follow the leadership line. At a YCL congress in Scarboro, for instance, I and other Stalinist comrades defiantly gave a standing ovation to the Soviet fraternal delegates who were only being given polite seated applause or even booed by the majority because of the recent invasion of Czechoslovakia, which I and my comrades in the hard-line faction of course supported.

A psycho-analyst would presumably seek to find out why I have this need to identify myself with unpopular political positions or with minorities generally, and even minorities within a minority. Why am I always seeking to rebel?

I don’t know, but perhaps it is a good thing not to follow the common herd. It begs the question what I’d have done if born behind the Iron Curtain. Would I slavishly have followed the Party line, or ended up in prison or a mental institution for constantly defying it?

Perhaps the clue is to be found in my departing speech from an FDGB (GDR equivalent of the TUC) hotel in Kuhlungsborn near Rostock in the then GDR in 1968. I stood up and told my hosts that I fully supported the Soviet-led invasion of (or ‘fraternal assistance to’ as I called it then) Czechoslovakia, and that I thought the GDR itself might be the next candidate because of bourgeois practices such as tipping waiters and dressing for dinner which I had observed during my visit. I got a frosty reception from State officials dressed in their finery, who evidently didn’t appreciate my telling them the Soviets should march in with tanks and sort them out. Being a foreigner, I got away with it, and was just called ‘a silly ass’ by Peter, our interpreter, who was himself a GDR citizen studying at Humboldt University in East Berlin, and quite critical of the regime in his own quiet discreet way.

This entry was posted on Wednesday, February 18th, 2009 at 12:00 pm and is filed under General, Politics. You can follow any responses to this entry through the RSS 2.0 feed. You can leave a response, or trackback from your own site.

Bad Behavior has blocked 505 access attempts in the last 7 days.