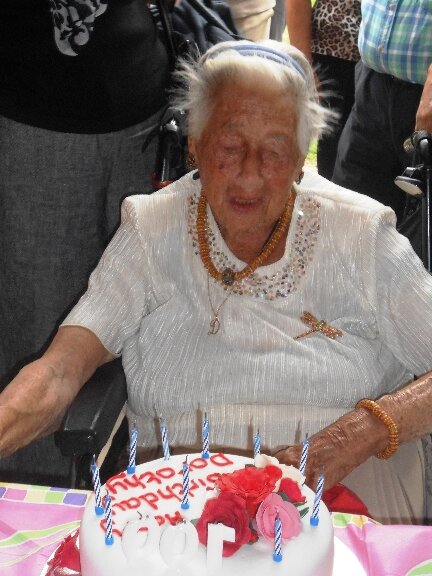 Mum had a good Summer as I took her out, weather permitting, most days in her wheelchair to parks, commons, shops, etc. in and around where we lived. She seemed to get used to the Nursing Home, where she had a big room with some items of her own furniture, pictures, books, photo albums and ornaments around her. She started referring to it as ‘home’.

Come November, however, when the nights started getting dark earlier and the windy, damp weather set in she seemed to give up. She stopped eating, even when I took her to the Lunch Club. She then, of course, got weaker. She came to one of our amateur Drama Group rehearsals week after week, saying she enjoyed them. She was once a member of the Drama Group. She came as a spectator to a rehearsal just 6 days before her transition. She also had her last cigarets then, throwing the last one away almost unsmoked.

Next day she was sitting up in her wheelchair in the Lounge of the Nursing Home, but couldn’t pick up a cup or glass to drink as her hands were shaking so badly.  The next day someone was giving her assistance to drink through a straw.

By the following day she was bed-ridden, and she transited to Spirit in the early hours of December 2nd, three days after retiring to bed on November 29th.

Frankly it was a release for her and me as well. Though of course I miss her physical presence, at 101 and totally dependent on others for everything, it was a miserable existence for her. I took her out and visited at least 6 days a week, but she’d lost interest over the years in almost everything apart from going out and smoking. She couldn’t smoke in the Nursing Home of course, unless we went out into the garden. She wouldn’t watch TV, stopped reading and doing puzzle books. Even most of her singing to herself stopped when in the Nursing Home.

Since she transited I have had messages from her via a medium and also direct. In fact the night she transited I saw her briefly in my bedroom as a bright orb. She later confirmed it was her, saying she hovered above her body in her room confused for while, then thought of me and was immediately transported to my room. Then she transited to the Spirit world where her siblings, parents, etc. greeted her. She even said her ex-husband, who treated her badly, apologized to her, so some kind of reconciliation. She is so happy to be with her friends, parents and siblings again, and to be ‘light as a feather’ and able to do everything she could before and more.

The medium’s message confirmed she had seen me make a stew, like I often made for both of us, the weekend after she transited and serve it up with a ladle, like I did when I cooked for her. The medium assured me everything would be OK as I got into a new routine. I’ve never had so much free time before in my adult life, as I was working till retirement 8 years ago and then looking after my mother most days.

The funeral is on Monday, a Christian one as she was C. of E. and also went to a Methodist church at one time. The vicar is a Methodist, but the emphasis in the two songs will be on surviving death, as is a poem she wrote ‘There Is No Death’ which I’ve printed on the leaflet with the Order of Service to be handed out at the ceremony, though the poem won’t be read out. I will read out a Eulogy to a wonderful mother. We shared a sense of humor, and I have on this computer and memory sticks her singing many of the songs, though it is too soon to watch them now.

What was also too soon was visiting the places nearby where I took my mother several times a week. I did this a day or so after she transited, taking a cassette player with me, which was working although very old. It was a windy day, and when I got home I put new batteries in the cassette player as the old ones were running down. The cassette player then wouldn’t work. Even without a cassette in it the spindle wouldn’t turn. I then got a spare cassette player out of it’s original packing. It had never been used or unwrapped; I’d bought it as a spare. The same thing happened: new batteries and the spindle wouldn’t turn. I knew instantly what had happened: either my mother, my partner in Spirit or someone else the Other Side had stopped the two cassette players working as they didn’t want me going out in the cold, damp, windy weather around places I’d been so recently with my mother playing music. It was too soon, and the weather wasn’t suitable either. Weeks later I got a replacement cassette player from a local store, but won’t be playing it outside till the weather gets warmer.

So good to know my mum has passed to Spirit, is healthy and fit again, is with those who went on before her and, as she said when still here some time ago, that she is never far away from me. The message from the medium confirms this, she knows what I am doing, and the cassette player incident also confirms this.

Truly there is no death. It is the biggest lie ever believed by human kind. There is merely a transition from one form of existence to another. As with my partner in Spirit, I will look upon the anniversary of her transition each year as a cause for celebration – her return home and re-birth into a new, eternal and much more rewarding existence.

This entry was posted on Wednesday, December 30th, 2015 at 3:53 pm and is filed under General. You can follow any responses to this entry through the RSS 2.0 feed. You can skip to the end and leave a response. Pinging is currently not allowed.

Bad Behavior has blocked 665 access attempts in the last 7 days.