Gone but not forgotten

A  bit of nostalgia here with people and places from my past.

First, the parties we used to have on New Year’s Eve and at other times throughout the year. Now most of the regular people who attended have passed on, including the joint host, my life-partner George. The guests who have passed on include Brian, Noel, Sheila, Lenny, Freddy (Freda – who always did a cabaret in drag), Roy and Marianne. Probably passed away as elderly and not heard of for years are Stanley, Bob and Patricia. Good times.

Places I have visited which no longer exist under those names/administrations include former Yugoslavia and at least 4 of its former 6 republics, the USSR and three of its Soviet republics, the Turkish Federative State of North Cyprus (now the Turkish Republic of North Cyprus), the German Democratic Repubic and its capital city East Berlin (Berlin, Capital of the GDR), West Berlin (then an occupied enclave inside the GDR, not officially part of the Federal Republic of Germany), and former Czechoslovakia (including both Slovakia and what is now the Czech Republic, visited in 1990 which was the early post-Socialist era but before it split into two countries) .

When you outlive so many people and countries you certainly start to feel your age.

Even here in the UK many places I lived in, and the borough I was born in, no longer exist. Middlesex, a county I lived in, has gone. So have all the old London boroughs. Many county boundaries have changed, with Hampshire losing both the Isle of Wight and Bournemouth, and Sussex being split into two.

My mother, born in 1914 and celebrating her 100th birthday next year, has of course seen far more changes in her lifetime, including the birth and death of the Soviet Union, the rise and fall of the Third Reich, and the disappearance of Prussia to become part of Poland.

As to my relations, so many have now passed to Spirit including all my uncles and aunts on my mother’s side of the family and of course both sets of grandparents (I never met my paternal grandfather, and only met my maternal grandmother once. We couldn’t communicate (only by signs) because of the language barrier – she was Greek-Cypriot). Also my father, his two brothers (my uncles), their wives, two cousins on my mother’s side, and many of my life-partner’s relatives who I regard as related (whether you call them in-laws or out-laws since there was no gay marriage or civil partnerships while my partner was alive). This includes his sister and 4 of his nephews, also two of his two sisters’ husbands. And his cousin Margaret and her husband.

Most of these people we knew and visited quite often, and it really makes me feel old when I remember my young nephews on my partner’s side who have since grown up, some married, had children and then died.

Places in London I remember have long gone. The cinema where I met my life-partner and a partner before him. The restaurant my father ran which gave its name to the Swiss Cottage area of London and should have been listed (see picture below) – the whole area is now unrecognizable. 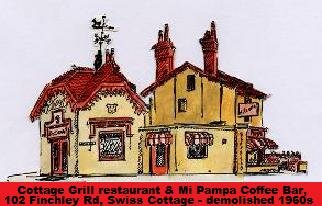 Also the hospital where I was born (see picture below), the Middlesex Hospital in Mortimer Street (near Oxford Street) scandalously demolished when it was due to be preserved as a hotel.

And of course the currency changed from pounds, shillings and pence, imperial measures went (only the mile kept for some obscure reason – too expensive to change all the cars and road signs?), and the language has changed dramatically with new words for things, and old words used as different parts of speech altogether. Thus we get ‘reveal’ used as a noun in place of ‘revelation’, ‘resolve’ as a noun instead of ‘resolution’, ‘structure’ used as a verb instead of a noun, with the horrendous (itself a ‘new’ word made from ‘horrible’ and ‘tremendous’) derivative ‘restructuring’ when the proper word is ‘reorganization’ or ‘rebuilding’ according to the context in which it is used. There are many more examples, for instance the reference to ‘Chrimbo’ for ‘Christmas’, and of course all the politically correct language which really is all far over the head of my mother who sings old songs with very politically incorrect terms included.

Oh, and the Labour Party used to be at least a nominally Socialist one based on the common ownership and control of the means of production, distribution and exchange, The Red Flag being its official anthem and the flag carried on its May Day parades, everyone calling each other ‘comrade’, resolutions passed committing it to things like giving up the British Bomb, and the old logo incorporating workers’ implements and the torch of liberty instead of the red rose (see picture of old logo below). The old logo of a shovel for the manual workers and a quill pen for the clerical workers and intellectuals, plus the torch of liberty was really a variation on the Communist logos – the hammer and sickle (representing the workers and the peasantry), hammer and compass (the workers by hand and by brain, East Germany), and the North Korean logos (a hammer for the workers, a hoe for the peasants and a brush for the intellectuals).

Times change, places change, people in my life change, and the world is now a very different place from when I was born in March 1945 at the end of the Second World War. Hitler was still Chancellor of Germany (just), Stalin was the Soviet leader, Churchill the British one and Franklin D. Roosevelt was the US President soon to be replaced by Harry S. Truman.

This entry was posted on Wednesday, December 4th, 2013 at 2:59 pm and is filed under General, Politics. You can follow any responses to this entry through the RSS 2.0 feed. You can skip to the end and leave a response. Pinging is currently not allowed.

Bad Behavior has blocked 597 access attempts in the last 7 days.