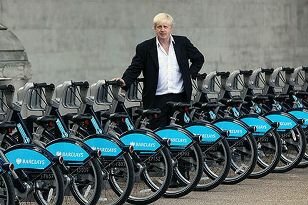 ‘Boris Bikes’ is the unofficial name for London’s bicycle hiring scheme, sponsored by Barclays Bank and initiated by London Mayor Boris Johnson. The scheme has recently been extended from Central London to some inner London boroughs like Wandsworth.

This has caused much controversy because bicycle hiring stations are being erected without proper consultation with residents, so valuable parking spaces for cars has been lost.

My main concern with the scheme, which I think is an excellent idea, is the danger posed to cyclists in London due to other traffic. Even where there are cycle lanes most of these are not physically separated from other traffic. However I am greatly in favor of bicycles, buses and trams being given priority over private cars in big cities like London.

Not only are our roads congested with moving traffic (sometimes moving at a crawl), but many side roads have cars parked in them all day for most of the week. This is no doubt because owning a motor vehicle in big cities like London often means people are very limited as to when they can actually use them. I gave up a small second-hand van years ago as it was parked in the road most of the week, and I still had to buy a season ticket for public transport to get to and from work because of parking restrictions.

Now we also have the Congestion Charge (recently contracted to a smaller area due to opposition from local motorists) as well as parking restrictions, and on our estate there are now two parking schemes. One is free to residents and their visitors if they can find a free residents’ parking bay, otherwise they have to pay to park in the road. Consequently other roads with currently no parking scheme are clogged with parked vehicles all day, and this is also true of many other parts of London.

Having a motor vehicle in big cities like London, let alone more than one motor vehicle, is becoming more and more of a problem for the owners and Londoners generally. Increasingly it is becoming more difficult to use them due to the Congestion Charge, parking restrictions, etc. Even if you use them to take a trip to the countryside or coast, because London has no urban motorway network it can take an hour or more just to get outside the metropolis. It is much quicker to go by train.

We sometimes went on coach trips from Battersea to the coast, and even using the few dual carriageways and the M25 orbital motorway it took over an hour to reach the Croydon area, which could  be reached in 10 minutes by train!

There was rumor of a proposal by the European Union to ban all private car ownership in inner cities (apart from vehicles owned by the disabled, doctors, etc.) Even if we don’t go this far, it may be necessary to widen the Congestion Charge area again, raise the charges, increase parking charges and restrictions and impose a higher road tax on vehicles owned by motorists living in the inner cities.

Due to the impracticality of using motor vehicles to travel to work in many cases in the big cities (due to lack of parking space, Congestion Charge, etc.) many drivers leave their vehicles parked all day, only able to use them in the evening and weekends for occasional shopping and other trips. Of course there is the ‘school run’ by parents who own cars, now it is often considered unsafe to let children walk or take public transport to school like we used to.

I can’t help feeling that owning one or more cars is often more of a status symbol than anything in big cities, where their usefulness is limited. I have not missed the motor vehicle I gave up years ago because of our excellent public transport system which runs 24 hours a day.

Apart from the factors mentioned above, motor vehicle use has to be reduced to combat global warming and climate change. Bicycles keep you fit (if the roads are safer) and do not emit polluting fumes. Therefore I am all in favor of the Boris Bikes scheme being extended to complement public transport, and car use in inner London being discouraged. However our roads need to be made safer, more segregated cycle lanes in London, and it is true that residents should be properly consulted before bicycle hiring stations are established, though there will always be a conflict between motorists wanting more parking space and other residents.

So I give a big thumbs up to Boris Johnson’s cycle hire scheme and extending it to other parts of London, but I can also see a need to restrict private car use in at least the inner city.

This entry was posted on Sunday, July 21st, 2013 at 11:18 am and is filed under General, Politics. You can follow any responses to this entry through the RSS 2.0 feed. You can skip to the end and leave a response. Pinging is currently not allowed.

Bad Behavior has blocked 3080 access attempts in the last 7 days.