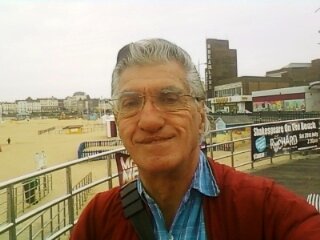 Dreamland tower in background, but amusement park and all facilities gone.

Having just had a day trip to Margate, where I spent many happy holidays in the 1950s and 1960s, it was fairly obvious to me why this and some other seaside resorts have seen better days.

The usual excuse is that people now go abroad where the weather is more certain. However surely that is all the more reason to provide entertainment for when the British weather isn’t so good.

The group I went to Margate with came home an hour early, spending only three hours in the resort because, to quote the team leader, ‘there’s nothing to do here’. It was true, unless you wanted to sit in cafes sipping endless teas and coffees. The weather was dry but overcast, so not beach weather (anyway the tide was out so a long way to walk even for a paddle.)

In the old days there was plenty to do when the weather wasn’t so good. Dreamland amusement park, for instance – now just a derelict site. A cinema on the promenade, now closed. Many shops have now closed in the High Street and on the front. The promenade was always very lively with many prize bingo places where my grandmother won loads of useful presents. These have disappeared from nearly all seaside resorts because the prizes got so awful. Instead of a dinner service for one win you got a tin of baked beans, and needed about 20 wins to get anything worth having.

The Sun Deck, a unique Margate feature, like a small pier on the beach, has long gone with its cafes, ice cream vendors, etc. The salt-water swimming pool was dry and is now used for boating, but it was essential for swimmers in Margate when the tide is out, and even when it’s in you have to wade out a long long way before it’s deep enough to swim. In the 1950s/1960s everyone used the salt-water swimming pool, Otto putting up wooden signs indicating the depth when the tide went out.

The pier is long gone, its entrance replaced by a glass monstrosity which ruins the whole outlook fron the jetty up the hill towards Cliftonville.

Margate is not the only resort to suffer like this, but an additional disadvantage is that the so-called off-peak cheap day return costs a massive £32 even if bought in advance, so £64 for a couple to spend a day there. By contast a period return to Lowestoft this coming weekend cost me just £20 and a period return to Portsmouth Harbour in August cost just £11.25, both about the same distance as Margate or even further.

Southend-on-Sea also suffers from the loss of the Kursaal amusement park, but it does have another little fun fair and its famous pier.

Brighton remains lively despite the loss of one pier. The other pier is free to go on, and has lots of attractions and cafes. Hastings pier is currently closed, but it also has a little amusement park, the attractive old town, shops, a cinema, shopping mall and the beautiful scenic views from Castle Hill and West Hill (from where you can walk over the Downs to Fairlight Glen and beyond). Lifts going up to both these hills.

Of course the most successful British seaside resort must be Blackpool which retains its trams, its Tower with its famous ballroom and other attractions, the Winter Gardens complex and the Pleasure Beach, an enormous amusement park. Plus the illuminations in season.

Margate’s illuminations have long gone, as has the Punch and Judy on the beach. And I didn’t notice the kiddies’ roundabouts on the beach either. Brighton has many attractions on the beach and lower promenade for both adults and children.

Dreamland was a huge loss for Margate, with its many rides, stalls, the Magic Garden and its once famous firework display every Thursday in the Summer. Plus cafes and beer halls – all gone forever it seems.

If seaside resorts want to start attracting visitors they have to provide entertainment when the weather isn’t so good. Not just machines in which to lose your money, but fun ones like the old laughing sailor at Margate, and the much newer automatic bowling lanes which many seaside resorts and piers have.

Margate has great potential, such as its great sandy beaches and shallow water for children to bathe  in safely, but it needs to get its act together. The rail company must be confronted for a start to slash its ridiculously high fares and bring them into line with other resorts. Dreamland should be rebuilt, and the cinema and ballroom reopened near the entrance. Would be nice if at least the Sun Deck could be rebuilt, and the salt-water swimming pool restored.

Most of the buildings I remembered as a child were still intact, including the old boarding house overlooking the beach where we used to stay (now a private residence). They need to be used to provide more entertainment than just endless cups of coffee and tea, without perhaps going so far as ‘kiss me quick’ hats and endless Gipsy Rose Lees to tell you your fortune.

The Winter Gardens looked pretty run down too, but used to be a hive of activity even in the daytime. Bands playing, puppet shows, but now it just seems deserted in the day like much of the resort.

So my next seaside trip will be to somewhere much cheaper to get to and with more things to do and see when you get there, even in the bad weather.

This entry was posted on Wednesday, July 3rd, 2013 at 10:30 pm and is filed under General. You can follow any responses to this entry through the RSS 2.0 feed. You can skip to the end and leave a response. Pinging is currently not allowed.

Bad Behavior has blocked 2932 access attempts in the last 7 days.