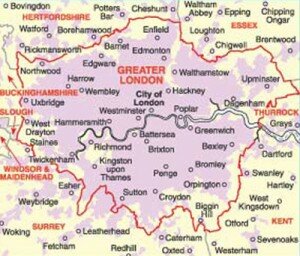 Red line is Greater London boundary, built up areas in mauve (click on map to enlarge.)

London is in a mess. It has always been in a mess as long as I can remember. For instance, I grew up from the age of 6 in the now extinct county of Middlesex, came under the Middlesex County Council education board, but we had the London postal address of Wood Green, London, N22.

To this day there’s a village in Essex, Sewardstone, which has the London postal district of E4.

Conversely many areas of Greater London do not include the city in their postal addresses. Many people still insist on including the non-existant County of Middlesex (e.g. Wembley, Middlesex) in the postal address. In outlying London boroughs many people still include the name of the old county before Greater London was created, so we get incorrect addresses like Croydon, Surrey; Ilford, Essex; Barnet, Herts.; Bromley, Kent. All these places are in Greater London and not in the above counties, but they don’t have a London postcode.

However their correct postal addresses do not need an incorrect county name, just the postcode after the street/area.

The old London County Council covered just inner London. It was abolished in the 1960s and Greater London was created as an urban administrative area which included most of the suburbs and urban area. However Greater London also includes some rural areas, whilst ribbon development means places like Woking, Leatherhead, Loughton, Cheshunt, Waltham Abbey, Watford, Hemel Hempstead, Dartford and Gravesend are now more or less joined up to London and are therefore considered part of the London urban area although they remain in the surrounding Home Counties.

So we get a mental picture of Ilford as a town in the rural fields of Essex, when in fact it is an East London suburb, Croydon is a South London suburb, etc. Battersea, where I live, was once in the county of Surrey, but we have long had the London postal district of SW11 so Surrey no longer appears in our address, quite rightly.

The Greater London administrative metropolitan area should surely include the whole urban area and the London postal codes should correspond to this.

The same applies, of course, to other urban areas, such as the West Midlands conurbation. Postal districts should be revised to reflect the fact that Birmingham, Wolverhampton, Walsall, Solihull, etc are all part of the same urban sprawl or metropolis – e.g. allocating all these places the postcode beginning WM or, if this is already in use, a similar one. The same applies to the conurbations around Manchester, Newcastle, Leeds, etc..

Maintaining the illusion that places are separate towns or cities surrounded by green fields and forests is really unhelpful, and including incorrect and sometimes obsolete county names in postal addresses is even more confusing.

Certainly large joined up urban areas should have one metropolitan authority administrating them, and a post code which reflects this fact.

This entry was posted on Thursday, June 10th, 2010 at 12:16 pm and is filed under General. You can follow any responses to this entry through the RSS 2.0 feed. You can skip to the end and leave a response. Pinging is currently not allowed.

Bad Behavior has blocked 616 access attempts in the last 7 days.