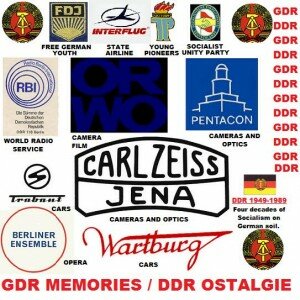 Ostalgie is the German term coined for nostalgia for the old Socialist regime in East Germany (Ost being the German word for East, thus: Eastalgia would be an English equivalent).

The film ‘Goodbye Lenin’ gave an idea how many former citizens of the GDR (German Democratic Republic or DDR to give its German initials) have a great deal of nostalgia for the now defunct State which was disestablished and its territory absorbed into the Federal Republic (former West Germany).

Brand names familiar to GDR citizens have disappeared, along with the full employment, security in old age, comradeship, and many other things which the old Socialist state gave them. Gone is the State which subsidized basic food prices, the cost of housing and put the emphasis on public services.

People in the West tend to forget that the GDR was one of the world’s leading industrial nations with a standard of living very high for the former Eastern bloc. Just look at the montage above to give just an idea of some of the excellent products and other things which came out of the former Socialist State. It was not just about the Wall and people trying to escape.

The lure of the capitalist enclave of West Berlin deep inside the GDR, and of products, etc. advertised on West German/West Berlin TV stations which could be received in the Socialist state, tended to make GDR citizens think the grass was greener on the other side of the Wall/Western state frontier.

In actual fact many of the products advertised but not available in ordinary GDR shops could be bought in the hard-currency Intershops, and most GDR citizens had access to West German marks sent to them by relatives in the Federal Republic.

Pensioners were free to cross the Wall and visit West Berlin, but it is true that this barrier surrounding the capitalist enclave prevented most GDR citizens from visiting the Western part of the city, and also stopped West Berliners visiting the GDR capital. This was because the open border in the city prior to August 1961 was bleeding the Socialist state dry.

Apart from GDR citizens emigrating to the Federal Republic permanently, many were living in the GDR capital and getting jobs in West Berlin which was getting the benefit of their education and presumably their taxes. Meanwhile they continued to live in subsidized housing in the GDR capital, shopping for subsidized foodstuffs in GDR shops, etc. West Berliners also took advantage of the open border to strip East Berlin shops of these subsidized foodstuffs, etc. The situation was ridiculous and could not continue indefinitely.

While the border installations between East/West Berlin and the two German states was essential (many states have physical barriers between them to control immigration/emigration, prevent smuggling and other illegal activities), it was not necessary to mine the borders or to shoot people trying to cross illegally. A much better solution would have been checkpoints where GDR citizens could cross to the West on payment of a hefty deposit forfeited if they failed to return (to compensate for their education, etc.), whilst West Berliners could have been free to visit the GDR capital provided they paid taxes on any subsidized products bought there when they crossed the Wall back into West Berlin.

The GDR was by no means the perfect Socialist state. But nor was it just a prison camp with millions trying to get out. Many were happy to live there when there were open borders, and some, such as current German Chancellor Angela Merkel and her family, actually emigrated the other way, from West Germany to the GDR.

There were good and bad things about the GDR as with all states. There was undoubtedly a privileged elite, and the political system based on a coalition government led by the Socialist Unity Party (itself an amalgamation of the old Communist and Social Democratic parties) meant it was not a democracy as we know it in the West, or a ‘bourgeois democracy’ to use Marxist terminology.

Socialist democracy was meant to be exercised thru the Dictatorship of the Proleteriat, which meant either a one-party state, as in the Soviet Union, or a one-party led coalition as in the GDR. This form of democracy could only work if millions of ordinary people took an active and everyday role in the process of government thru the party machines. Once they relaxed their grip for a moment, opportunists, careerists and even criminal elements could easily gain control, and thus a ruling clique of bureaucrats, politicians and diplomats in effect governed the country (and others in the Socialist bloc). Once there, it was very difficult to shift them.

However, the upheavals of 1989 were a golden opportunity to preserve the positive aspects of Socialism in the GDR and elsewhere, while getting rid of the negative aspects. In the GDR the basis was already there for a genuine multi-party democracy. All the parties existed and were represented in the GDR parliament – Liberal Democrats, Christian Democrats, National Democrats as well as the Communists and Social Democrats of the Socialist Unity Party. So a simple change in the Socialist Constitution would have broken up the coalition and allowed these parties to put up rival candidates to contest free elections. This would have made it possible to vote out a government considered inefficient or corrupt, or one which was simply disliked, and vote in a new one.

The Socialist Constitution would have preserved the nature of the State based on some form of common ownership of the means of production, distribution and exchange, at least unless and until the electorate replaced it with another Constitution in a referendum.

Instead the citizens of the GDR (and other Socialist states) threw out the baby with the bathwater. In many former Socialist countries they actually kept the bathwater (corrupt politicians, etc.) while throwing out the Socialist baby. The GDR simply allowed itself to be annexed by West Germany, and then used as a pool of cheap labor.

At the same time West German companies seized control of former GDR industry (this was the second time factories had been seized, since the Soviet Union grabbed much machinery from the then Soviet Zone of Germany as reparation fees for the terrible damage caused in the Great Patriotic War/Second World War).

In seizing control of former GDR factories the West Germans claimed they were out-of-date and clapped out, and so obtained them very cheaply. How on Earth could world-leading camera/optics brands like Carl Zeiss of Jena, Pentacon, etc. be ‘clapped out’? Not forgetting many other high-tech industries, the GDR being a world leader in electronics and many other fields. Nor should we forget the world-famous Meissen porcelain factory near Dresden, or indeed the excellent S-bahn elevated urban railway system which served both West and East Berlin, run by the GDR authorities.

After reunification Easterners flooded to former West Germany and other Western countries where wages were higher, and remember the shops/rents etc. were no longer subsidized in the East. Unemployment became the new scourge of the Eastern regions of Germany, a concept unknown in the GDR and other Socialist countries.

The former citizens of the GDR joined the capitalist rat-race where it was every man or woman for themselves, and not being used to such a society many fell by the wayside. No wonder there was nostalgia for the old GDR which looked after its citizens from the cradle to the grave. Not perfect by any means, but at least it gave its citizens security.

So let’s remember the good things about the German Democratic Republic, and hope that one day the united German people can again turn to Socialism and find models which work even better than the old ones.

Indeed, I hope many countries in the EU and elsewhere also take this path, and there can be no better example surely than former Yugoslavia with its unique system of worker cooperatives and market place Socialism, combining the competitive element of capitalism without the disadvantages. All Yugoslavia lacked was a political system which matched the economic one in allowing competition and choice.

The GDR achieved much with its State owned and small family companies and showed that if anybody could make Socialism work efficiently the Germans could. They also achieved much in the sporting field of course, winning many Olympic medals for such a small country.

As to human rights, the GDR was streets ahead of the Soviet Union and many other Socialist countries. Homosexuality was legalized in 1968, conscientious objectors were excused military service (uniquely in the Socialist countries), and freedom of religion was guaranteed with even Christian Democrats sitting in Parliament. The Lutheran, Catholic and other faiths flourished (the Catholic church also flourished in neighboring Socialist Poland of course.) In the GDR, as in all Socialist countries there were equal rights for women, and this was not just on paper, creches were provided so women could go to work and earn a wage.

It was a sad day when that Wall came down in Berlin because it did not symbolize the reunification of Germany under a progressive government. Instead it symbolized the collapse of the great Socialist experiments in Eastern and Central Europe, and in the Soviet Union, which achieved much despite the mistakes, faults, corruption and crimes of Stalin and others. It truly symbolized the throwing out of the baby with the bathwater.

Instead of democratic reform and opening up of the borders along the lines described above, but preserving what 4 decades of Socialism had achieved, the former citizens of the GDR lost these achievements, and lost the unique comradeship and identity of their proud little state sandwiched between West Germany and Poland. A state, which against all the odds (Soviet reparation fees, only a third of a country, the divided city of Berlin with the temptations of the West Berlin in its midst, recovery from the devastation of the Second World War without Marshall Aid) became a leading industrial nation with a standard of living far outstripping that of the Soviet Union and many other Socialist states.

May Socialism flourish on German soil again, because all things considered they made a damn good job of it and will do even better next time!

This entry was posted on Wednesday, March 3rd, 2010 at 11:35 pm and is filed under Politics. You can follow any responses to this entry through the RSS 2.0 feed. You can skip to the end and leave a response. Pinging is currently not allowed.

Bad Behavior has blocked 272 access attempts in the last 7 days.