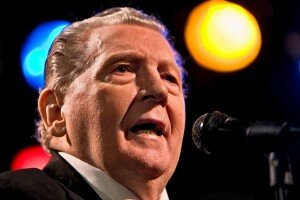 Not a blog about aliens, but about Jerry Lee Lewis, and how other popular music has passed me by as though I were living on Mars. Many people identify the past decades by the pop hits of the day, or the styles of music/fashions. So we have the rock’n'roll era, the Merseybeat era of the middle Sixties, the Flower Children/Hippie era of the late 1960s, the punk era, New Romantics, the Boy Bands, etc. I’m not an expert on most of these, because I completely missed most of them.

For me the decades are identified by Jerry Lee Lewis and HIS music. So we have the rock’n'roll era when his huge million sellers and popularity were about to knock Elvis off his throne, until the hoo-ha erupted over Jerry’s marriage to his young cousin, causing radio stations and TV in America to pull his records and live appearances off the air. He did, however, manage Top Thirty hits in the UK where the scandal over his marriage broke in 1958, ‘High School Confidential’ hitting #12 in the UK pop charts in 1959, ‘Loving Up a Storm’ made #28, then Jerry stormed back into the Top Ten at #10 with the 1961 hit ‘What’d I Say’.

A decade of playing mainly small clubs, with no big American hits, followed the 1958 fall from grace. In 1963 he left Sun Records of Memphis and signed with Smash-Mercury, and should have hit big with ‘I’m On Fire’ a brilliant single, but The Beatles had taken Britain and USA by storm, so denying Jerry another hit. But around this time he recorded some fantastic ‘live’ albums, which captured Jerry Lee at his wildest. ‘The Greatest Live Show On Earth’ recorded in Birmingham, Alabama and ‘Live At The Star-Club, Hamburg’ backed by the Nashville Teens. The latter album is probably the wildest rock’n'roll album ever recorded by anybody, and both have become classics.

Smash-Mercury experimented with various albums and different styles of music for Jerry in the 1960s. So apart from the live albums (more of which followed – Greatest Live Show On Earth Part II recorded in Fort Worth, Texas and an album recorded at The International Hotel, Las Vegas) they released the ’Country Songs For City Folks’ and ‘Soul My Way’ albums, as well as the great rock’n'roll albums ‘Return of Rock’ and ‘Memphis Beat’. Some tracks on the more experimental albums featured  Jerry without his famous piano.

Although ‘Country Songs for City Folks’ didn’t provide a hit, they pointed to the direction Jerry would take two years later, and that album helped launch the career of Welsh Jerry Lee fan/singer, Tom Jones. After listening to the album, Jones recorded ‘Green Green Grass of Home’ and ‘Detroit City’, with arrangements very similar to Jerry’s versions of those songs on that album.

Then in 1968 Jerry recorded another Country album and the single ‘Another Place, Another Time’ hit the Country Top Ten, reaching #4 on the Billboard chart. His next single, ‘What’s Made Milwaukee Famous’, hit #1 on the Cashbox Country chart and #2 on Billboard, and the Top Ten hits continued thruout the 1970s and into the 1980s. During that time Jerry became one of the biggest Country Music artists. In 1969 Billboard voted him Country Music artist of the year, and Cashbox voted him male Country vocalist of the year.

His success was phenomenal. Four singles reached the Top Ten in 1968, including two which hit number 1 on either Cashbox or Billboard, but 1969 saw him hit the Top Ten with six singles, some recorded years before at Sun records who now released the tracks to cash in on his new found success. With both number 1 and Top Ten hits in each of the years 1968, 1969, 1970, 1971 and 1972, Jerry continued to have Top Ten Country hits right thru the 70s, his last one being ‘Thirtynine and Holding’ in 1981on Elektra, which reached #4 on the Billboard charts. After a short spell with MCA, Jerry had no regular recording label, along with many other older Country artists, so the hits dried up.

The 1970s saw Jerry riding high in the Country charts, with no less than twentyfive Top Twenty hits, and more followed in the early 1980s. He made many TV appearances, and recorded ‘The Jerry Lee Lewis Show’ in 1971 with many guests, following the formula of ‘The Many Sounds of Jerry Lee’, a 5-part TV show made in 1969, featuring both rock’n'roll and Country. Unfortunately these TV shows got very limited airing, and were not screened outside North America. 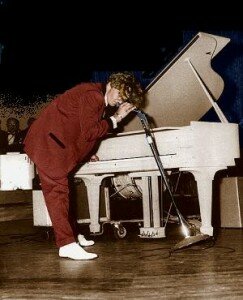 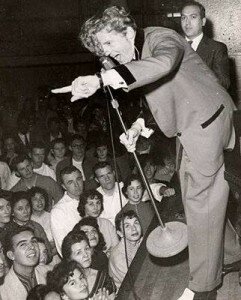 So for me the 1950s was the decade Jerry rose to fame, and notoriety, and achieved many million-sellers. This was also the period of wild live shows, with Jerry dressed in brightly colored velvet or leopard-skin trimmed suits, and with long blond hair, or hair with blond highlights. All very outrageous and ahead of their time. 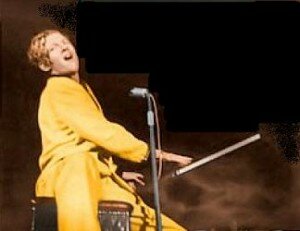 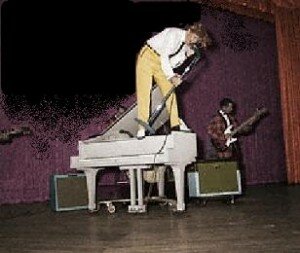 Jerry was also one of the first male pop stars to sport long hair, which can be seen hanging down round his face in British TV shows from 1964 such as the Granada TV spectacular and Ready, Steady, Go! However with so many British groups wearing their hair long, Jerry decided it was no longer cool and has worn it much shorter ever since. The 1960s were the decade of wild, wild shows, culminating in Jerry’s return to the charts as a hit-making Country artist. The 1970s saw a return to rock’n'roll, with albums like ‘The Session’ recorded in London with guest musicians, and continued success in the Country charts. Also many tragedies in Jerry’s personal life, and an increased reliance on drugs, which produced some erratic behavior. 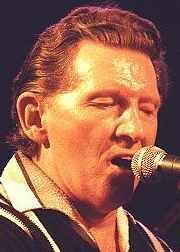 The 1980s saw Jerry nearly die when his stomach ruptured in 1981, but he recovered against all the odds and returned to the wild lifestyle. Two wives died in the 1980s, and he married for the sixth time. His appearances on stage in this decade usually saw him wearing shades to protect his eyes from the bright lights, no doubt as a result of the drugs he was taking. 1989 saw the release of the biopic ‘Great Balls of Fire’ based on Myra Gale’s book of the same title, starring Dennis Quaid playing Jerry Lee. Actually ‘biopic’ is a bit of misnomer since, after briefly covering his childhood, it only really concentrates on about two or three years of his life, up until his marriage to Myra. Dennis Quaid replaced the original intended star, Mickey Rourke who probably would have made a much better job of it. Everyone agrees Quaid overacted and turned Jerry into a goofy, two-dimensional, cartoon-like character. But Jerry recorded the soundtrack, re-recording many of his old hits and other titles, and did a brilliant job. The resulting soundtrack album included an extended version of ‘Great Balls of Fire’ with an extra piano solo building up to a great climax. Jerry often plays this exciting ‘movie’ version of his big hit in live performances.

Then in the early 1990s Jerry suddenly put on a lot of weight. A new album was released, in CD format, ‘Young Blood’, and a rock’n'roll single complete with video ‘Goosebumps’. These made no impact on the charts, and were rather badly produced, although with re-mastering they would be fine.

In the first decade of the 21st century his marriage to Kerrie finally broke up, and Jerry had his biggest selling album ever with ‘Last Man Standing’ featuring duets with the likes of Rod Stewart, Ringo Starr, three of the Rolling Stones and many Country and Blues artists including Kris Kristofferson, George Jones, Willie Nelson, Merle Haggard and Buddy Guy. The album sold over half-a-million copies in the United States and was awarded a gold disk. The album shot straight into 4 Billboard charts the week of its release in September 2006, hitting #1 Indie, #4 Country, #8 Rock and #26 Pop, indicating the wide variety of musical styles on the album.

Jerry has now put down over 30 tracks for a new album to be released possibly later this year.

So I identify the decades by Jerry Lee’s career – 1960s being the decade he left Sun for Smash-Mercury, and the following decade being when he left Mercury Records for Elektra. 1980s when he left Elektra for MCA, then was without a regular record label. 1990s saw the Sire release of ‘Young Blood’, and the 00s saw the Artists First hit album of duets and Jerry appearing on all the big U.S. chat shows.

So the various eras of popular music have completely passed me by. I know little or nothing about New Romantics, GlamRock, punk, rap, hip-hop, disco, grunge rock, boy bands, and the rest. I am more familiar with the old rock’n'roll artists of the 1950s like Little Richard, Fats Domino, Chuck Berry (all still alive and kicking), and traditional Country stars like George Jones, Merle Haggard, Tammy Wynette, Hank Williams, etc.

I briefly got into some early New Country in the 1990s and discovered artists like Randy Travis, Alan Jackson, Mary Chapin Carpenter, Patti Loveless, The Mavericks, Vince Gill, etc., but now New Country has just become too pop orientated. It is summed up by the George Strait/Alan Jackson recording ‘Murder On Music Row’ which describes how traditional Country Music was killed off by the Nashville music industry in order to win worldwide fans and big bucks.

In actual fact, it was Jerry Lee’s cousin, top Country hit-maker Mickey Gilley (with 17 #1 hits to his name) who opened the door to New Country when John Travolta starred in the ‘Urban Cowboy’ movie filmed at Gilley’s club in Pasadena, Houston, Texas. Dressing in cowboy clothes and riding the mechanical bull became a worldwide craze, and the film itself included much music which could in no way be described as traditional Country. New Country then followed close on the heels of the movie, with the only Country and Western thing about much of the music and its stars being that they wore cowboy hats. Older, more traditional Country stars were largely denied record labels let alone hits. To get a recording contract you had to be young, good looking and look cute in a cowboy hat. Now Nashville’s output is just a dirge of middle-of-the-road pop.

But older artists like Jerry Lee are still out there performing and recording, and with the astounding success of ‘Last Man Standing’, which also produced a DVD/TV program called ‘Last Man Standing Live’ including duets with Tom Jones, Nora Jones, Solomon Burke, John Fogerty (Creedance Clearwater Revival vocalist) and some of the artists on the duets album, the first decade of the 21st Century has marked Jerry’s new-found success and third era of chart hits in America, and his first gold record for many decades. 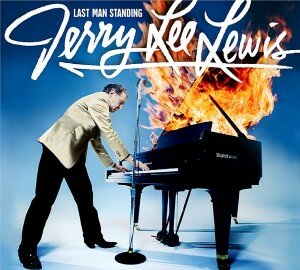 This entry was posted on Tuesday, August 11th, 2009 at 10:18 am and is filed under Music. You can follow any responses to this entry through the RSS 2.0 feed. You can leave a response, or trackback from your own site.

2 Responses to “On Another Planet”

Bad Behavior has blocked 996 access attempts in the last 7 days.