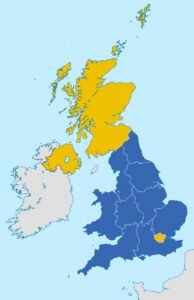 This map, showing how the regions of the UK voted in the Referendum on whether to Remain in the EU or Leave illustrates clearly the huge problem with not setting any kind of threshold for invoking Article 50 in the event of a Leave vote. The yellow countries/regions voted Remain, the blue countries/regions voted to Leave. 48% to 52% is not a huge majority, but more to the point, two of the four countries which make up the UK and the capital city, London, voted to Remain. How is it democratic to take these regions out of the EU against their will?

I can’t see what the solution is except another Referendum which stipulates all four UK countries have to vote Leave for it to be operative. The current situation means Scotland is likely to leave the UK, and it will cause big problems for Ireland and the peace agreement which requires an open border and cross-border institutions. Already there is a move to re-unite Northern Ireland with the Republic.

On top of all this, if the end result of Article 50 negotiations means a Norway-type access to the single market for what remains of the UK there will still be free movement to/from EU countries, the very thing most Leave voters do not want. Nor, I suspect, do many of them want the UK to break up and the Union Flag to be consigned to the dustbin of history.

Nobody is keen to sort out this mess, hence Cameron, Johnson and Farage all washing their hands of the mess they’ve created. May just keeps kicking the whole issue into the long grass. This is what happens when you ask the electorate a very complex question without explaining the full possible implications of a Leave vote, especially when lies were told about £350 million extra being available for the NHS if we leave the EU, and being able to control immigration from the EU, which now looks extremely unlikely.