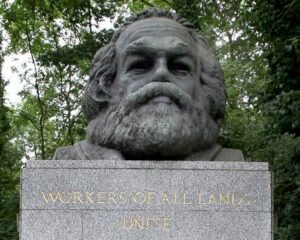 The header demonstrates my Socialist principles. Although I would admit to being a Marxist, I am no longer a Communist. Karl Marx, together with Friedrich Engels, laid the basis of Socialism by showing how the surplus value of labor was exploited by the capitalist ruling class. They also theorized on how historical materialism meant society progressed thru stages, and that capitalism would inevitably collapse, due to its own contradictions, and be replaced by Socialism. This would be a society based on the common ownership and control of the means of production, distribution and exchange. The formula Marx described for the Socialist era was ‘To each according to their work’.

Marx and Engels also forecast that Socialism would eventually be replaced by Communism, a society where the State and all its institutions had withered away. There would be no police, no courts, no jails, no money, no State itself – just a completely self-governing society with an abundance of goods and services. I now feel this is far too utopian an ideal and there will always need to be a truly democratic State to avoid a corrupt ruling class rising again.

Marxism provided the basis for many Socialist parties, including the British Labour Party. Until it was re-written prior to the New Labour era, Clause IV of the Labour Party clearly stated Marxist principles, and this Clause was printed on all Labour Party membership cards. It sought the common ownership and control of the means of production, distribution and exchange. The 1945 Labour government not only greatly increased public ownership, but went further and adopted Marx’s formula for the Communist era for the National Health Service and Welfare State: ‘From each according to their ability, to each according to their needs’.

In the 20th Century we saw many Socialist states arise including the Soviet Union. While the basic necessities were catered for, and full employment achieved, an increasingly corrupt ruling class of bureaucrats arose with perks and privileges denied to the rest of the population. This, in turn, encouraged more careerists and opportunists to join the ruling Marxist-Leninist parties in order to get these privileges for themselves and their families. Since there were no opposition parties, it was very difficult to remove this ruling clique.

The Soviet dictatorship reached its peak under Stalin, but it was started by Vladimir Lenin and Leon Trotsky. They crushed all opposition, even from other Socialist parties. The Kronstadt rebellion in the early days of the Soviet state was ruthlessly crushed by Lenin using Trotsky’s Red Army. Yet the demands of the Kronstadt rebels were to reinstate the original aims of the ‘Great October Socialist Revolution’ (October 25th by the old Orthodox calendar, November 7th by the current Western one); to allow non-capitalist parties and to end the perks for bureaucrats. The ruthless Bolshevik dictatorship of Lenin, Trotsky and others meant Stalin was later able to impose his reign of terror. Although his methods industrialized a backward country and made it into a superpower, millions died in the process, including those who perished in the labor camps (gulags) and due to his infamous show trials which managed to eliminate many of the original Bolsheviks, but which did nothing to deal with the corrupt bureaucratic ruling class distorting the system.

So I am firmly against the ‘Dictatorship of the Proletariat’ as described by Lenin and others. I also reject violent revolution which usually continues afterwards and devours its own. Evolution not revolution is my motto, though revolutionary change may need the might of the organized working class using industrial action and mass demonstrations to inforce their Will if parliamentary methods fail or are blocked by the Establishment. (Corbynistas take note!)

I do not describe myself as a Marxist-Leninist for these reasons. The term ‘Dictatorship of the Proleteriat’, even if it was truly the working-class which was ruling and not a class of bureaucrats, takes no account of the rights of minorities. The idea was the masses would join the Marxist-Leninist Party and exercise Socialist Democracy thru it, leading eventually to the self-governing society of Communism. In actual fact, as the 20th Century experiments showed, it just led to a new ruling class of politicians and other bureaucrats since it was mainly careerists and opportunists who flocked to join the ruling parties.

What is true, however, is that a constant flux between capitalism and Socialism; between common ownership and privatization, is destabilizing. Therefore once Socialism is established and working it would be advisable, via a Referendum, to draw up and implement a Socialist Constitution which would enshrine the principle of public ownership and control of the bulk of the means of production, distribution and exchange (private shops and small family businesses would still be allowed, subject to laws to prevent exploiting any hired labor.) All political parties should be allowed to contest free elections, but to overturn the Socialist Constitution and re-introduce large-scale private enterprise they would need to call another Referendum to replace the Socialist Constitution with a different one. All Referendums on Constitutional matters should be compulsory (could be done with the Census) with at least 60% voting to change the status quo in order to overturn an existing Constitution.

Finally, State ownership or nationalization has proved cumbersome and inefficient in many cases in the Soviet Union and elsewhere. While it is suitable for certain industries and services, such as those which have national grids or networks (the railways, the phone service, the postal service, the public utilities), for most industries and services there are other forms of public ownership such as cooperatives, mutuals and individual publicly owned companies all competing in a Socialist market place. This was basically the system operating in former Yugoslavia successfully before that federation broke up due to rampant nationalism.

So although the Red Flag and Karl Marx appear on my Facebook header, I am not a Communist nowadays. The Red Flag has long been a Socialist symbol, and the anthem ‘The Red Flag’ was sung at all Labour Party Conferences. I hope it continues to be and that the old Clause IV is reinstated along with the old logo to replace the New Labour red rose logo. As to the sculpture of Karl Marx, this stands atop his grave in Highgate Cemetery, London. Although it may not at the moment be one of the main tourist sights of the capital, maybe it should be. Marx’s ideas have been distorted and misused, but so have the teachings of Jesus Christ. Nevertheless Marx correctly described the nature of capitalist exploitation of labor, and showed how it must eventually collapse and lead to Socialism.

I will quote Lenin briefly, when he said progress consists of ‘two steps forward, one step back’. The collapse of the imperfect Socialist states of the 20th Century were one step back, but if we learn from their mistakes and do not repeat them we can move forward towards a better form of Socialism, and many different political parties can offer their own formulas. ‘Let a thousand flowers bloom’ said Mao, even if it wasn’t practised in China. But the best quote of all, and here I paraphrase, came from the great British Socialist Tony Benn who advised people to ask who gave politicians their power, who are they responsible to, and how we can get rid of them if necessary. This is essential to avoid a corrupt ruling class rising again.